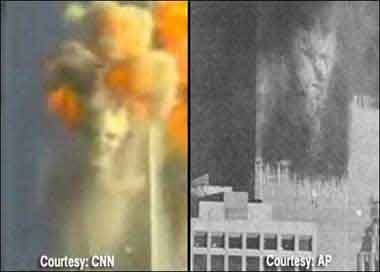 September 11, 2001, Demon Pictures From The Terrorist Attacks: Are these photos real? Probably. Realize this though, demons are normally not that scary looking. They only portray themselves as being so because of the arrogance they have about themselves. “[Satan] you said in your heart, ‘I will ascend to the heavens; I will raise my throne above the stars of God; I will sit enthroned on the mount of assembly, on the utmost heights of Mount Zaphon.'” Isaiah 14:13(Yes, even to this day, thousands of years after they were kicked out of Heaven because of their pride and arrogance, they still have it. Could it be because they’re successful at tempting people to look at pornography [among many things?])

Can they transform into something they normally wouldn’t look like? Like the ones in these photos? Yes. We know that heavenly angels are able to form themselves into different beings.“Do not forget to show hospitality to strangers, for by so doing some people have shown hospitality to angels without knowing it.” Hebrews 13:2. So demons, like the ones in these pictures who used to be angels, can still transform themselves.